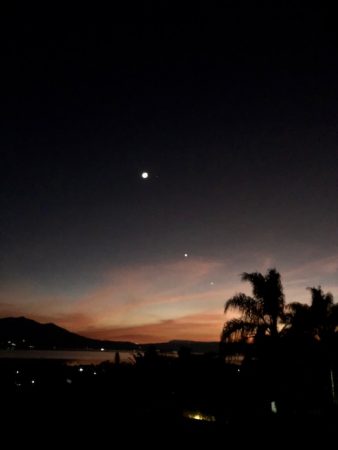 Seven months into Gringolandia find us enjoying our mañana lifestyle where it’s OK to put off today what you can do tomorrow, or the next day or next week! We feel we have entered Phase II of our permanent Mexican vacation—living more comfortably and consciously in our adopted country. The first six months, as mentioned in prior posts, felt like “bootcamp”, or campo de entrenamiento (say that quickly after a couple shots of tequila!). It has been an initiation into a different culture, language, monetary system, and living at 5,000’ on an uneven, rocky terrain. However, we’re living and learning—estamos viviendo y aprendiendo—and adapting nicely!

It took us nearly six months, but we found our ideal, bright, modern lakeview home that we have leased for a year or more. We are feeling blessed, having gotten our sky back and being able to watch the planetary conjunctions along the ecliptic celestial plane in real time!

We remain in upper Ajijic and within walking distance to our language school, to restaurants, markets, cinema, hiking trails, a gym, etc., while living high above it all—our initial goal. Hey, we’re outlookers and dreamers! And, yes, we have to walk up and down rocky Calle Revolución, but it’s worth it and keeps us fit…and it’s fitting to take siestas.

Ajijic is bursting with activity with the return of the snowbirds fleeing frigid Canada and the northern U.S. The town (and country) just celebrated Mexico’s 1910-20 Revolution, as well as San Andreas, Ajijic’s patron saint. Then 12/12 is La Fiesta de Guadalupe commemorating the 1531 appearance of Guadalupe—the spiritual mother of Mexico. Celebrations, which are many, include lots of fireworks and rockets—cohetes that can sound like bombs exploding at all hours in concert with church bells, parades, marching bands, barking dogs and general rejoicing. We certainly revel in the silence when it arises, but can appreciate the seemingly nonstop celebratory music that’s a huge part of the Mexican culture.

Our short Spanish language film, Otro Lado www.otroladomovie.com, featuring Alex’s soundtrack, had its final festival screening at the Coronado Island Film Festival in San Diego on Alex’s birthday, November 9th—giving us our 15th laurel. We are now seeking distribution so that the film can be seen publicly via on-line streaming. The film has had a good run, and we wonder what the future may hold! Netflix series, anyone?

I can’t believe that another year is nearly spent—a life-changing one for us on so many levels! And then we plunge into the challenging astrology that 2020 proposes as well. Saturn (time/structure/restraints/law) will be conjuncting or aligning with Pluto (initiator/transformer/ death/rebirth) and Jupiter (expansion/ authority/knowledge/good fortune) in Capricorn (earthy/systems/government/work ethics) through next December. According to some astrologers:

Not only will Alex and I turn 70 next November—a major passage into the “bonus years” of life—but there is the U.S. election—as if you needed to be reminded. It’s anyone’s guess (maybe Putin knows) whether the American experiment will survive, but the soul of the country appears to be at stake. We are relieved to be out of the U.S. at this critical turning point and glad that we didn’t have to escape over an inhumane wall! (See Otro Lado above).

Meanwhile, the earth continues to spin miraculously through the galaxy, dancing with planets in an endless universe of starlight, music and black holes. Wow! Despite the challenges and uncertainties of being human, we are an integral part of this astounding, unceasing multiverse.

May you be in a state of amazement and wonder—amazed to be alive and wondering what’s going to happen next! May you surround yourself in beauty, with high-minded, open-hearted people doing what you can and what you love to do! May you celebrate the holidays or Winter Solstice in whatever way best nourishes your spirit and spread the joy!